Mabon is one of the eight Pagan Sabbats and takes place during the Fall Equinox (September 21st-23rd). It represents one of two points of perfect balance on the Pagan Wheel of the Year—the second being Ostara, the Spring Equinox. During this time, day and night are of equal length, the masculine and feminine aspects are in perfect harmony. We give thanks for all that we have and celebrate good tidings to come. But it is also a period before a great transition, as winter and his frosty touch lurk just around the corner, ready to cloak us in darkness.

Ancient cultures around the world have recognized the Fall Equinox as a sacred time. In ancient Greece, Oschophoria was a festival held in the fall to celebrate the harvesting of grapes for wine. In the 1700s, the Bavarians (ancient Germans) had Oktoberfest during the last week of September. China’s Mid-Autumn festival is celebrated on the night of the Harvest Moon and is a festival of honoring family unity. Even our American Thanksgiving was initially celebrated on October 3rd, closer to the actual harvest season.

Mabon is but one modern iteration of these early autumn festivals. The name was first coined in the 1970's by Aidan Kelly, an American academic, poet, and influential figure in the Neo-Pagan Revival, and references a character from Welsh mythology, Mabon ap Modron (Son of the Great Mother). Like so many early Pagan mythic figures, Mabon's origins are confused and obscured. He is perhaps most well known as a minor figure in Arthurian legend for his role in the tale Culhwch ac Olwen.

In this story, Arthur aids his cousin Culhwch in his quest to win the hand of the fair maiden Olwen, daughter of the cruel giant Ysbaddaden. In order to marry Olwen, Culhwc must complete a series of impossible tasks, culminating in hunting the giant boar, Twrch Trwyth. In order to achieve this final task, Culhwch and Arthur embark on a tertiary quest for Mabon, the legendary hunter who would prove the key to their success.

Culhwch and Arthur wander the forest, searching for the world's oldest animals to ask if they know the whereabouts of Mabon. They ask animal after animal, until they meet the oldest known living creature, the Salmon of Lyn Llyw. The wise salmon tells the heroes how Mabon was stolen from his mother's arms when he was just three nights old, and every hightide, he can hear the hunter's sorrowful lamentations from his prison beneath the cathedral of Gloucester. Moved by the creature's tale, Culhwch and Arthur ride on the back of the enormous salmon and rescue Mabon from his prison. Grateful for his freedom, Mabon agrees to join them in their quest and together they defeat the boar. 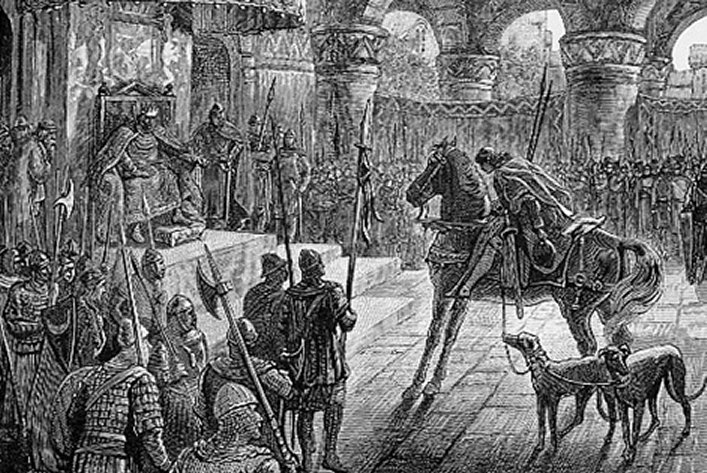 Many theorize that Mabon is the demotion of the Celtic god Maponos (a name which translates to "the great son" or "Divine Youth") son of the Earth Goddess Modron. Little is known about Maponos from the Celts, but the Romans apparently loved to conflate him with Apollo, both deities being handsome youths with a penitent for hunting, music, and occasionally healing.

Some like to speculate that the myth of Mabon was the Celtic equivalent of the rape of Persephone, with Mabon's kidnapper cast as the god of the underworld and his capture and inevitable escape representing the cycles of death and rebirth implicit in the changing seasons.

While there's little physical proof of this interpretation, it certainly is a poetic one. To imagine a once bright and shining deity  trapped in the realm of the dead--now transposed as a Christian Cathedral, his haunting lamentations still echoing through its walls, certainly mirrors our own modern search for Pagan enchantment and spirituality in the wake of centuries of erasure at the hands of Monotheism.

It's lack of historical grounding lead many write Mabon off as a minor sabbatt,  but I like to think of it as an opportunity to celebrate our ability to create our own myths and magick anew. Just as Autumn is the season following the life-giving times of Spring and Summer and preceding the cruel death of winter, so too is the God Mabon born of both life and death. He is a paradox, much like magick itself.

For modern-day Wiccans and NeoPagans, this is a time of community, kinship, and kindness, hence the many “Pagan Pride Day” celebrations taking place during this time. To share the bounty of the harvest with all, many of these celebrations will also include a food drive. However you may choose to celebrate, Mabon is a time where we can embrace change rather than fear it.

In spell and ritual work, we use ingredients or objects that correspond with our intent to enhance our magickal energy and ensure our request is heard by the universe.

Including many diverse correspondences in a spell or ritual may boost the power of said spell, but please know that your intention and Will are the most important aspects. Additionally, substitutions can always be made— such as rosemary in the place of any herb, and clear quartz in the place of any Crystal.

Since Mabon is a time of celebrating the harvest, abundance, graitiude, and familial love, we want to choose objects that share these same symbolic associations and echo that same energy.